Notre Dame golfer Hunter Ostrom picked up his 2nd big win of the summer with a birdie on the 2nd playoff hole.  Ostrom, who already has the Southwestern Amateur title this summer, posted a 4-under par 67 including birdie on the par 5 finishing hole to take the clubhouse lead at 13-under.  The final group each had a chance to join him at 13-under or win outright coming to the 18th.  Christopher White, who had a 4 shot lead through 12 holes and had reached 16-under before bogeys at 14, 16 and 17, laid up on the 18th and was unable to convert a 30 foot birdie putt to win outright.  Kevin Johnson, St. Leo incoming freshman, laced a 2nd shot to the back of the green and had a downhill 24 ft putt for eagle to get to tie Ostrom at 13-under.  His putt curled in the right side and we were headed to a playoff.  Charlie Musto from the U.S. Naval Academy birdied 10 through 12 to move to 14 under before bogeys at 16 and 17.  He faced a 6 ft birdie putt on the last that slid past the right side to join the playoff.  In the playoff, Ostrom and Johnson both two putted from long distance for par and White was unable to find the green with his 2nd after a drive to the right tree line.  His bunker shot went long and his 30 ft par putt hit the hole but did not fall.  On the short par 4 second hole, Ostrom hit driver for the first time all week and found the back fringe of the green.  Johnson, forced to be aggressive, pushed his drive right and it hit a tree and bounced out of bounds.  Ostrom chipped to 3 feet and made the putt for birdie and is the winner of the 63rd Eastern Amateur.  Charlie Musto was 4th and Ambrose Abbraciamento from San Diego St posted 6-under par 64 to finish in 5th. 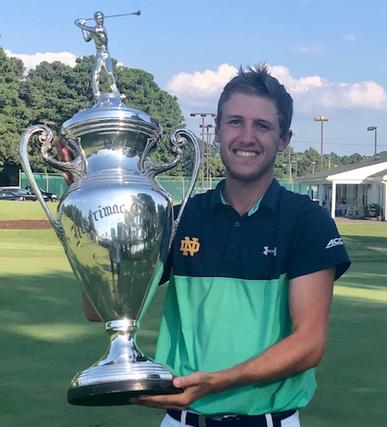 
Nick Lyerly, UNC Greensboro rising sophomore can add the Eastern Amateur to a resume that includes the 2016 North Carolina Amateur and the 2018 Southern Conference Tournament.  Lyerly, who led from the opening round, played 62 holes before making his first bogey of the tournament, a three putt on the par-3 ninth.  Lyerly, who only got 11 holes in before storms ended his practice round got to 17-under in Sunday's round before playing the final 10 holes in 1-over to post a final round 69 and claim a five stoke victory.  Lyerly played his rain shortened practice round with longtime competitor Tripp Summerlin and the two were paired together on Sunday.  The two grew up playing junior golf together and have played dozens of tournament rounds with one another.  Summerlin, an Appalachian State rising junior who was runner-up in the Sun Belt tournament this year, shot an even-par 70 to tie VCU golfer and Chesapeake resident Alston Newsom at 11-under par 269.  Newsom, who grew up playing the Elizabeth Manor course fired a steady 2-under 68 on Sunday.  Peter Gasperini (Radford), Kengo Aoshima (Wake Forest) and Michael Brennan (Leesburg, VA) tied for 4th at 8-under.  Zinyo Garcia (Australia), Daniel Gurtner (TCU), Davis Lamb (Notre Dame), Michael Sass (College of Charleston), and Peter Knade (Maryland) rounded out the top 10 at 7-under par.Type your paragraph here.