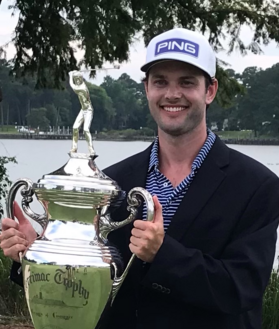 Evan Beck was a runner-up the last time he played in the Eastern Amateur.  He was a 20 yr-old Wake Forest student and All-American.  A professional career was hindered by injuries and eventually he took time away from the game.  With his amateur status reinstated, he has returned to competitive amateur golf.  The now 30 year old  was the steadiest around the renovated Elizabeth Manor Golf & Country Club for 72 holes and it resulted in a 1 shot victory at 10-under 270.  The golf course features all new bunkers, all re-grassed tee boxes, some additional fairway bunkering and 7 holes were lengthened.  Hundreds of trees have been removed and trimmed.  One thing that hasn't changed is the Bermuda rough. The rough was up to its highest level in many years and was the primary reason for the highest winning score since 2003.  Birdies were there to be made, but so were plenty of bogeys or worse.  Eight players made more birdies than Beck this week, but his 6 bogeys led the field comfortably.  Davidson's Alex Heffner tied for the most birdies with 20 and he finished a shot back at 9-under 271.  Heffner was painstakingly close to finishing 10-under.  A birdie on 17 lipped out and his 50 foot attempt at eagle from the right fringe on 18 hit the edge of the hole, popped up and trickled out to 4 feet.  He converted the birdie and his final round 69 gave him a 9-under total.  Heffner who finished 8th in the A-10 conference tournament this spring for the victorious Davidson team was one of just two players (Beck) with four rounds under par.  Incoming Virginia Tech freshman David Stanford who recently was co-medalist in US Amateur qualifying finished in solo 3rd at 8-under par 272.  NC State freshman Jake Herring moved into contention with birdies on 15 and 16.  He stood 8-under on the 18th with a chance to make eagle and get to 10-under.  His second found the water and he made bogey to drop to 4th alone at 273.  Christopher Newport golfer Robb Kinder, who led through 36 and shared the 54 hole lead shot 72 and was 5th at 274.  UVA's Jack Montague had the low round of the day at 4-under 66 and shared 6th place with Virginia Tech golfers Drew Brockwell and Charlie Hanson, Christopher Newport golfer Alex Price, and Jimmy Dales from University of Wyoming